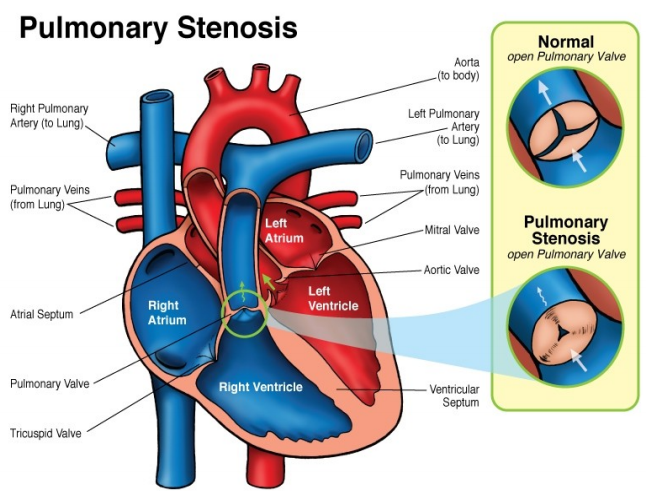 Few people realise that Noonan syndrome (NS) is the second most common syndromic cause of congenital heart disease, exceeded in prevalence only by Trisomy 21 (Down Syndrome). Several cardiovascular issues can occur in Noonan syndrome. The most common by far is pulmonary stenosis (often with dysplastic valves; 50–60%), followed by hypertrophic cardiomyopathy (20%), and an atrial septal defect (6–10%). However ventricular septal defect, peripheral atrioventricular canal, aortic stenosis, mitral valve abnormalities, aortic coarctation, and coronary artery anomalies are also noted as being present in individuals with NS.

Pulmonary Stenosis (PS)
Pulmonary stenosis (or PS) is a condition whereby the amount of blood going to the lungs is limited because of narrowing of the pulmonary artery, either at the valve or just below or above it. Typically there is a thickening of the valve leaflets which reduces their mobility – a condition termed ‘dysplastic’. The effects of this narrowing are that the heart muscle has to work harder to pump the blood to the lungs. The heart muscle becomes much thicker in the relevant pumping chamber, the right ventricle. Thankfully, this can potentially reverse itself if the narrowing is removed.
A longitudinal study published in 2014 followed 113 people with Noonan Syndrome for an average of 14 years. The participants varied in age from 2 months to 44 years. 75 patients had PS (66%) 43 patients had mild PS (57%), 7 patients had moderate PS (9%) and 25 patients had severe PS (33%). All mild cases were non-progressive – meaning they didn’t worsen with time. 3 patients with moderate PS had a procedure (average 12 years after diagnosis). All of the people with severe PS had a procedure to treat the issue (average 2 years after diagnosis).

Diagnosis of PS
• Electrocardiogram. During this procedure, patches with wires (electrodes) are placed on the chest, wrists and ankles. The electrodes measure electrical activity in the heart, which is recorded on paper. This test helps determine if the muscular wall of your right ventricle is thickened (ventricular hypertrophy).
• Echocardiography. Sound waves bounce off the heart and produce moving images that can be viewed on a video screen. This test is useful for checking the structure of the pulmonary valve, the location and severity of the narrowing (stenosis), and right ventricle function.
• Other imaging tests. MRI and CT scans are sometimes used to confirm the diagnosis of pulmonary valve stenosis.
• Cardiac catheterization. During this procedure the doctor inserts a thin, flexible tube (catheter) into an artery or vein into the groin and weaves it up to the heart or blood vessels. A dye injected through the catheter makes the blood vessels visible on X-ray. Doctors also use cardiac catheterization to measure the blood pressure in the heart chambers and blood vessels.

Treatment Options
Approximately 33% of all people with PS will require treatment of some description. Treatment is only needed when the narrowing is of a sufficient severity to be a concern.
• Drug treatment
In newborns with severe valve narrowing (known as critical pulmonary stenosis), a drug called prostaglandin is administered to keep open a pipe (the duct) that is open in the womb but that usually shuts after birth. This allows blood to enter the lungs until a more permanent treatment can be given (usually ballooning).
• Surgery
Balloon valvuloplasty – If treatment is needed and the narrowing is at the level of the valve then the valve can be directly ballooned internally. Essentially a catheter is inserted through the leg vein under general anaesthesia and a balloon placed across the valve. When inflated the valve stretches up. The catheter and balloon are then removed.
Valvotomy – When balloon valvuloplasty isn’t an option, the patient may require open-heart surgery. During surgery, the doctor either repairs the pulmonary artery or valve or replaces the valve with an artificial valve. Repairs to other congenital heart defects can be made during the surgery, as well. There’s a slight risk of bleeding, infection or blood clots associated with the surgery.

Prognosis and Summary
The prognosis for PS is generally good, with survival without complications nearly 100%. In the long term, these children fare well and most have no symptoms and lead normal lives. Some children require repeat balloon procedures. Sometimes the narrowed valve becomes leaky after an operation and this itself can be a problem ultimately needing surgical valve replacement in later childhood or early adulthood.
Although any heart condition is worrying, people with PS should take confidence in the positive and successful long term outcomes provided by treatment of this condition. 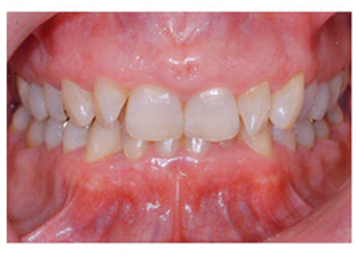 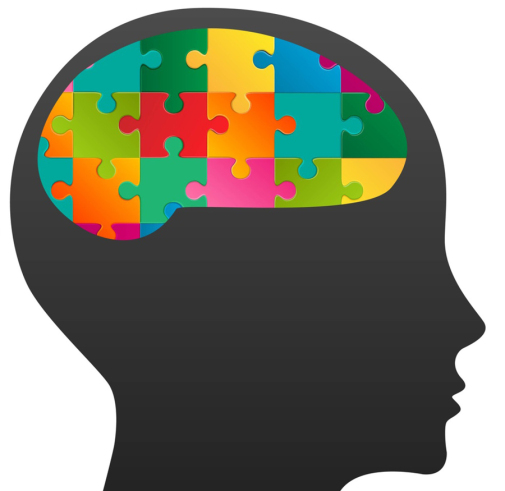