We invite you to meet individuals living with Noonan Syndrome and share their journeys... 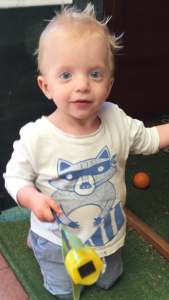 Benjamin has a PTNP11 mutation responsible for his Noonan Syndrome. Ben was born with a pulmonary valve stenosis and undescended testicles; the latter of which was repaired surgically.

Ben is an energetic, affectionate little boy who brings joy to everyone he meets. He loves music, cars and playing with his twin, big sisters.

Cooper was born with Pulmonary Lymphangiectasia which caused severe respiratory distress. We were given roughly a 2%  chance of him coming home due to the disease and how it was affecting his lungs and impacting on other organs.

This rare lung disease is what led to Coopers clinical diagnosis of Noonan Syndrome.

Noonan Syndrome has certainly changed our lives and we would love to lose all the medical concerns that come with it. Unfortunately that isn’t going to happen and the next best step we can take is making waves and creating awareness for Noonan Syndrome so it’s not a forgotten Syndrome, so that it can continue being researched.

Hopefully one day it can be better supported here in Australia. 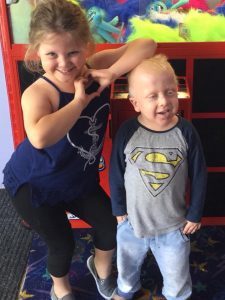 Dane has Noonan like Syndrome with Loose Anagen Hair, a rare mutation that appears on the Shoc2 gene. The diagnosis detected and confirmed when he was 6 years old.

Dane had cardiac surgery at birth to correct a coarctation of the aorta & PDA, dilatation of the pylorus at 8mths to move obstruction, Llads procedure at 11mths to correct a duodenum inversum and malrotation, fundoplication & gastrostomy surgery at 18mths to stop the relentless vomiting, tonsil & adenoid surgery to assist sleep apnea and endless hospital admissions for atopic infections.

The RASopathies neurological impairment effects his speed of processing information, working memory, fluid reasoning, visual perception, executive functioning and he has been diagnosed with dyslexia, ADHD and anxiety; as well as features of OCD. The comorbidity of his situation, including fine and gross motor impairments, create barriers to academic achievement. He has a personalised curriculum to progress at his own rate. His subject levels range from kindergarten to year 2 (he is in year 3) but his personability, engaging nature and negotiation skills are above his peers. He is a paradox as his perception can be on an adult level when in an area of interest, but on paper that needs to tick boxes he is categorised as mild intellectual disability. His neuropsychologist concluding that his general intellectual functioning cannot be easily summarised by a single score, at a single level.

Dane has a twin sister who does not have NS. Dane tracked larger than a singleton pregnancy during his gestation and was born longer and heavier than his twin. He dropped off growth charts shortly after birth and currently weighs less than half of his sister’s weight. Dane started growth hormone in December but results seem to be discouraging so far, as recorded for NLSLAH cases. His disturbed sleep still remains our biggest challenge.

Regarding our journey, the trauma sits in your peripheral as the world moves without you. Life can be a battle for the most part but it’s those moments of awesomeness that outweigh the rough stuff. Dane’s twin is permanently set at DEFCON 1, his Wonder Woman, forever at the ready to rescue him. But he actually saves me in ways that can only be understood when the world stands still. The highs and lows within a day, so extreme, that life is lived on a different level. Raw, intense, terrifying and horrendously fantastic.

Ziggy is 10 years old and was diagnosed at age 9 with Noonan Syndrome PTPN11. 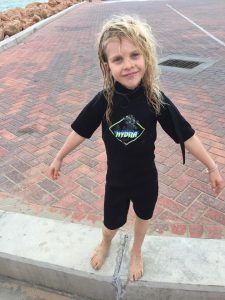 She encountered so many struggles throughout her life and it was a relief to get the diagnoses.
Many trips from a young age to the doctors and even referrals to Pediatricians but no one understood what was wrong; no talking; not developing etc, emotional issues.

At age 9 the school intervened as to why she was so low at school and not retaining anything. Along with her size and weight; she was sent for tests and finally discovered Noonan Syndrome. Once diagnosed and went to PMH given a booklet on what to “look out for” and sent on our way.

Physically I have been lucky to not experience a lot of the complex struggles these kids can go through; I think if she had had them tho that at an early age that maybe Noonan Syndrome would of been detected. She recently was put on growth hormones as the doctor local GP sent her for tests as she was vastly small for her age. Ziggy has the other standard issues heart murmer, aches pains, food, etc. Our story, and recently cross checking with other kids with PTPN11 is the similarities in emotional and learning issues. As Noonan Syndrome is so complex and each child’s severity levels different in many areas; it saddened me that the help needed in a area can’t get the support as the Australian Government doesn’t recognized Noonan Syndrome as a disability! The US and the UK do.

It can be very tiring trying as a parent to work out the issues and find answers; paying privately: explaining about Noonans and how to solve that yourself. So Academically Ziggy’s IQ tests both a school and privately were just above the line by 2% level. She is below average but nothing else we can do. I’ve done speech and enrolled her in Kumon for the added support she needs. We saw the Neuroscience Unit who diagnosed her issues with short term memory issues, mild autism and adhd and Dysthymic Disorder. Additionally I took her for a private comprehensive psychological report and confirmed Dysthymic disorder. Also discovered was Alexithymia which explained her emotional lack of empathy and ability to express. As she’s got older the struggles and outbursts are so carried yet the underlying struggle she has in her head to grasp, make sense; and get peace. I give her the tools best as I can but her internal dialogue saddens me. Her academic results were so well below average the psychologist insisted on conducting another IQ test disagreeing with the schools results. Results were just above the line - almost on the line, the line of requiring a teachers assistant.

Noonan Syndrome to me as a parent is like they have an invisible wheelchair no one can she or understand, yet it’s there. The last private pediatrician I saw privately who was a waste of time sadly confirmed her mental development was that of a child 3-4 years younger and just to medicate. So, I am 1 1/2 years in and still learning what I can do to assist Ziggy and recently contacted the Neuroscience Unit to see if they re test for any changes - as I don’t see any improvement and sense deterioration almost; and was told they don’t. I managed to speak to a social worker due to my concerns for Ziggys emotional outbursts and anxiety; on many levels and frustration in not learn and retaining. He put me onto Disability Services who advised they have severe issues which ‘ I totally understand kids in wheelchairs being taken care of ‘ etc and she needs to really be “low” to qualify. She advised it would be the same when the NDIS comes in. Ziggy is low - but low enough for assistance. I totally understand this logically but it remains that the grey area of complexity for the Noonan Syndrome kids, again.

As a parent I do fully accept Noonan Syndrome and that as long as Ziggy is happy the rest is just living with Noonans; yet the other part in what more I can do off my own back as clearly there is no system and support specific for Noonan Syndrome is that I am saving to see a private pediatrician who is a Developmental Pediatrician so I can see any suggestions I can add to what I can offer Ziggy during her growth and equip her with tools that will make living with these obstacles easier for her life ahead. Apart from all that I can say Ziggy has the best personality understanding she has obstacles she makes her bravery and courage to try things and live life large! My main contribution to her little spirit is that we are an active family - trying things and always to be kind. Her favorite saying is “it’s called enjoying your life” 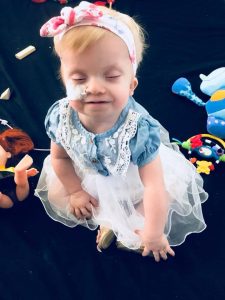 Aria has a mutation in her NRAS gene causing her Noonan Syndrome. Aria was born premature and was diagnosed whilst in the NICU.

Aria’s body has been affected in many ways.

Aria has sclerocornea, she had a graft on her right eye at 3 months old. She also has ptsosis and nystagmus.

Aria has a murmur, thickened heart valves and a rare heart condition called multifocal atrial tachycardia for which she is on regular medication for.

Aria has severe feeding issues. She is completely nasogastric tube fed with small tastes of food orally. She also has severe reflux and so is on continuous tube feeds.

Aria has a complex airway and obstructive sleep apnea. She uses a cpap machine when sleeping.

Aria had an anterior anus which has since been surgically corrected. She had a colostomy bag for the first year of her life.

Aria has JMML for which she is currently on IV chemo. Aria will likely need a bone marrow transplant.

Aria is developmentally delayed and is seen by a Speech Pathologist, Physiotherapist and Occupational therapist. Due to her vision and hearing impairment Aria is also seen by Australian hearing and Vision Australia.

Aria is a determined little girl who reaches goals and milestones in her own time. She is always happy and takes everything in her stride. Aria loves the wiggles and enjoys dancing to their music. She brings so much love and joy to her friends, family and everyone she meets along her journey.